Tilt of Glory: The Leaning Temple of Huma 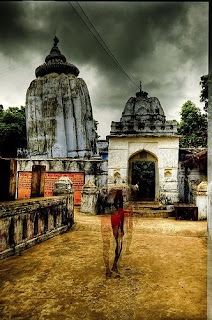 It was a picture perfect September morning in the late monsoon. We had just performed puja at the shrine of Goddess Samleswari, the presiding deity of Sambalpur, and our driver Junnu had arrived after offering his Ramadan prayers. A perfect time to start for the famous temple of Huma, 28 kms away from the city of Sambalpur. The landscape en route wore an extra layer of green, brought about by weeks of heavy rain. The only break from the lush green surroundings came from the occasional sightings of the river Mahanadi, racing restlessly forward. It was at a clearing on the bank of this river that our vehicle came to a halt. The scenic beauty of the place—a confluence of river Mahanadi and river Dhulijore—is breathtaking.

Small shops displaying hibiscus, earthen lamps and prasad flank the small pathway leading to the temple gate, but the sellers are not quite nagging—a welcome break from their brethren manning the more renowned centers of pilgrimage. At the archway the tilts of the main temple and other structures took us by surprise. Leaning seemed to be the most preferred posture at this place, without props of course.

As we joined the queue to offer puja to Baba Vimaleswar Mahadev—local version of Lord Shiva—we felt suffocated inside the cramped and dark hallway, the plump pillars taking up most of the space. One restless woman raised her voice against the lengthy puja the priest conducted for previous devotees as her irritated husband left the place out of sheer frustration—and other devotees supported her protest with deep sighs. When our turn came, we had to wait sometime under the stone doorway before the last devotee cleared the way. No prizes for guessing our postures under the dwarf doorway: leaning of course. The sanctum sanctorum provided no respite, with its 5 ft x 5 ft size and oily walls and damp floor. When shall poor mortals like me start ignoring these small distractions in the path to God?

Puja over, we went round the compound that housed smaller temples, an imposing white pillar, a colourful image of Hanuman and one building which housed the sadhus, who had made this seat of Saivism their home. The structure that fascinated me most was the one with a reclining roof to the left of the main temple, which looked like another residential quarters, presently not in use. It has its own compound wall, now moss-covered. Near the pillar were gathered stone figurines bulls of various shapes and sizes. One wondered how these were lying there in the open, without being pilfered. Was it for the notice board of the archeological department that declared the temple as a protected monument and warned people against vandalism? However the place is not well maintained and reeks of utter neglect.

The back door of the compound opens to the steps to the river Mahanadi. The ghat affords excellent view of Orissa’s largest river, full of grace and grandeur. Here on the ghat visitors get a chance to feed a particular type of fish, known as ‘Kudo’. Catching god’s own fish is considered sacrilegious, so the fish here grow fearless and fat, and feed from the palms of the devotees. Even they have their own names, with which the temple worker calls them for feeding during mealtime. It is a different matter if the doubting visitor had no clue as to how to verify this claim.

About the most striking feature of the 17th century temple, that is tilting, many theories are put forth. The most popular and the plausible seems to be the one that points to the movement of the ground soil during floods in the river. Another view is that the ingenious architects designed the structures like that to protect structures from flooding of the two rivers from different sides. This is why the many structures are leaning on different sides. This ‘by design’ theory also explains why the degree of tilting remains the same all these years, and does not grow as in case of the other renowned tilting structure, the leaning tower of Pisa.

We come back to our vehicle, minds still preoccupied with the mystery of the tilt. A cement plaque carrying the names of the high and mighty of the society stands forlorn on the ground. It is the foundation stone for accommodation facility for the tourists. There is no sign of any such construction coming up at the place. Despite the utter neglect and apathy, faith and the love for antiquity brings visitors to this wilderness in large numbers.
For similar stories please read Hits and Misses. Buy it at Lulu.com or at Amazon.com.
Posted by Chinmay Kumar Hota at 6:18 PM