As my high speed train (HSR or High Speed Rail) left Tainan for Taichung I could not remove from my mind the insistent crooning of Akshay Mohanty, “Aaji kali je dhana heuchhi naa tara taichung”. I seemed to hear the song louder every time the electronic display board of the coach showed the reducing distance to Taichung during the 184 km journey of 43 minutes. My present journey and Akshay’s song had evoked a fond childhood memory about the paddy seed which had been so popular among Odia farmers decades ago. My grandfather spoke highly about this high yielding variety seed, and I was now headed for the origin of the fabled seed. As I alighted from the HSR I experienced some kind of spiritual connect.

The paddy seed association was so strong in my mind that I frantically looked for paddy fields on both sides of the road as my taxi sped down the 10 km distance from the HSR station to my hotel in the central part of the city. That was futile, because like any other ambitious metropolis, Taichung had also committed its real estate to more profitable use—for malls, hotels, roads and commercial buildings. “I will have to wait for the desired paddy”, I said to myself as I engaged myself in enjoying the window view. Taichung looked as busy as our own metros but things moved smoothly in a very systematic manner. Pedestrians waited for the lights to turn green even if there was not a vehicle or a policeman in sight (in fact I didn’t see a single policeman in my two-day stay in the city).

The window of my twelfth floor hotel room opened to a big park, complete with jogging tracks, a pond, flower beds, well manicured lawns, landscapes, kids’ playgrounds, tennis courts, telephones, toilets, eateries and all other amenities. Everything gelled so well with the leafy environment of the park. I waited for the next day so that I would head for the park first thing in the morning. Next morning as I immersed myself in my  workout among the local folks who jogged, walked, played tennis, did tai chi exercises, I felt truly rejuvenated. 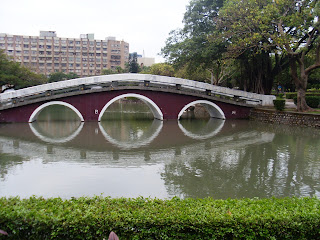 Taichung does not offer any historical sites for the tourists unlike Tainan, our previous city of visit, which has forts built by the Dutch, Chinese and even a British residency building. However, the natural science museum of Taichung is simply awesome. The 22-acre museum with its stately glass and steel buildings is right in the heart of the city, alongside upmarket shops, malls and restaurants. The robot, dinosaur, mummy and 3D movie sections are popular, especially with the kids, although I liked the imposing botanical garden inside a greenhouse, full of exotic plants and a fascinating aquarium at the basement. The mission of the botanical garden is to display and protect the floral biodiversity of Taiwan by existing as an information resource for the community, government and science, and to be a place of beauty for all visitors to enjoy.
Just near the approach road to the entrance of the museum I discovered an Indian restaurant, a rarity in Taichung. The naan and chicken butter masala provided a welcome break from the Taiwanese cuisine and the regular McDonald’s and KFC fare. I curiously looked for the owner of the establishment who would most likely be an Indian, but there was no Indian face around. I asked the person who was serving us about who owned the place and he said he did. He was Fred Lin, an Indian of Chinese origin from Medinipur. Fred told us that Indian food was popular with the locals, and we could see it from the full house. 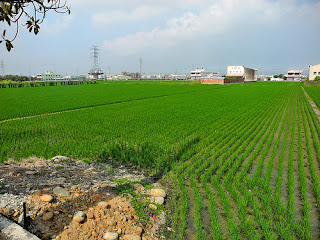 A visit to Taichung is never complete without an excursion to the tranquil and serene Sun Moon Lake, 125 km and a two-hour drive away by bus. This bus journey was more significant for me as it brought me face to face with the fabled Taichung paddies. There they lay, stretching to the distant horizons on both sides of the highway— saplings from the seeds so well celebrated by Akshay Mohanty. The fields soon gave place to mountainous roads affording breathtaking scenery. Sun Moon Lake is named so because the shape resembles the sun on one side and moon on the other. Besides the captivating views of the lake and the surrounding mountains, this place provides a slew of activities like boat tours, cable car rides, amusement park adventures in the adjacent Formosan Aboriginal Culture Village and so on.

Sun Moon Lake teems with eating places supplying exotic seafood and delicious fruit salads. I enter into a restaurant to order the shrimp on display. To my great relief I find the owner well versed in English which makes the ordering part easy. I strike a conversation with him and gather that he is also bitten by the travel bug. He has visited 42 countries so far, but sadly not India yet. He has decorated the walls of his joint with his travel photos. The shrimp dish he prepares for me tastes heavenly.

On my return journey to Taichung in the evening I could not see the dark paddy fields from my bus window, but I could feel the calm that I experienced whenever I visited my grandfather’s farm years ago.