When I planned my trip to Taiwan some of friends asked “Why Taiwan?” I could have gone to Singapore, Malayasia, China, Thailand or Hong Kong or maybe Venice or New York.

It was another fact that I’ve already been to some of the above named places and the other places I was not in a mood to explore, hence I picked up a place which was plain different from these touristy places. Many Indians do not go there, for that matter not many westerners too. I was surprised not to stumble upon a Bengali tourist in my 3 days of stay in two cities namely Kaohsiung and Tainan so far. It is a bit mystifying indeed given their strong yearning for exploring least frequented places of the world. I am pinning my hope on Taipei, the capital, to meet India’s most travel crazy people.

Coming back to the “Why Taiwan” part, the question was often being asked by China, who were never comfortable with the existence Taiwan  as a democratic and separate country. Officially Taiwan is known as Republic of China and they claim sovereignty over the mainland China too, which is too much for the Big Brother to digest. Taiwan, formerly known as Formosa, lives under the shadow of Chinese aggression or even takeover. But the stance has softened in the recent years as an era of rapprochement and mutual acceptance has been ushered in by the winds of globalisation. The young people love it on both sides of the Taiwan Strait as they do everywhere, India Pakistan included.

Taiwan, which has the shape of a sweet potato, is a food lover’s paradise. The people here love their meat too much—anything that moves, crawls, walks or swims (leaving, of course, the humans) is welcome for their dishes. The whole place is bustling with eaters any time of day. Night markets, which are common in all Taiwanese cities are humming with shoppers, and eaters. Every imaginable food is being ordered by the enthusiastic buyers and being cooked right there: fish, octopus, sharks, shrimps, beef, pork, beetle, rodents, you name it you will get it. For those who do not relish meat, Taiwan offers tasty fruits and vegetables in plenty. The guavas and bananas tasted heavenly when I picked them up from a street seller on a Saturday outing. I am not telling you the price as it may spoil your taste.

Taiwanese people just love cycling and it is evident on their roads. Bikes are available everywhere for hiring, even for free, and almost all the roads have wide tracks for bikers. Cycling is not only encouraged it is also celebrated. Bikes are the most visible evidences of the Taiwanese people’s resolve tominimise pollution and make their cities and surroundings environmental friendly. Kaohsiung, the second largest city of Taiwan, was till recently a dirty industrial town and shipping port, with polluted water bodies and wasteland. People have changed the face of the city completely with their magical green touch. Now the natural settings are protected and cleaned, half the city travels underground in a very efficient metro rail system; tourist boats run on solar power and of course people pedal their way. The vast city park is a delight to watch in the morning: full of walkers, joggers, tennis players and groups elderly men and women deeply absorbed in their Tai chi exercises, in tune with soothing music. Giving company to humans are birds In the trees and  ducks in the lake. Man is in perfect harmony with nature in the salubrious morning moments.

The scene is so different from our garrulous and impolite ways. I am reminded of the din created by my fellow travellers from Kolkata to Bangkok during the first leg of my journey. The whole scene inside the aircraft seemed to have been hijacked by a big group of Hindi speaking young traders who had big parcels with them. They bragged and boasted about their expertise and familiarity with the Bangkok commerce, without caring a fig about passengers who wanted to sleep in the middle of the night. 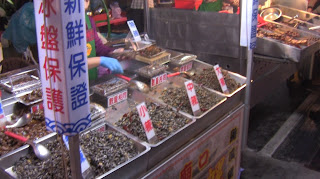 A shop selling sea food in a night market in Kaohsiung.
Posted by Chinmay Kumar Hota at 6:02 AM