Phailin is just hours away from landfall at Gopalpur-on-sea. It will tryst with Odisha at about 6 PM today, multiplying its present intensity manifold. The sea waves will surge, sending water 10 ft up, inundating coastal areas of Odisha which lie barely above the sea level. Although Odisha authorities say 300,000 people have been evacuated and brought to safety and notwithstanding Odisha Chief Minister Naveen Patnaik's assurance that there will be 'zero casualty', it is hard to believe that all the vulnerable people have gotten themselves away from harm's way. Just now I read a newspaper report that fishermen in the coastal Odisha have refused to budge from their homes and hearth, and of course the sea. There must be many more like them who would leave it to chance rather than accept the inconveniences of evacuation. 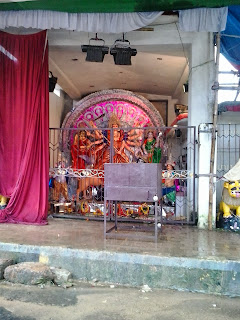 Many in Odisha have pinned their hopes on supernatural intervention. These are the times of the annual visitation of Goddess Durga, the symbol of victory over evil. Dasahara, as the week long celebrations is called, stands for truth, victory, prosperity, renewal and purification. Durga is a powerful goddess capable of crushing her opponents, however mighty they may be. She is also a loving goddess, the mother of the powerless and the virtuous.

Many believe that the simultaneous arrival of Goddess Durga and Phailin is only to accentuate what she hasdone always, slaughter the opponent and save her children. While the people are bracing themselves up for the impending calamity, the fervor for the goddess worship has not abetted a bit. The cities and villages of the state are soaking in festival cheer with colorful and brightly lit platforms dotting all over.


Come what may the worship of the Goddess will proceed with due sincerity, if not with the expected gaiety and grandeur. The idols of the Goddess, resplendent in their glory seem to infuse a kind of confidence, courage and reassurance like nothing else can, among the pious people of the state, who are a little anxious now.