Phailin in the Air

Although people of Odisha are very familiar with cyclones and storms 'Phailin' is something unknown to the people of this part. Phailin is named after all a sapphire in Thai language. The name has been given to the cyclone by Thiland, much before it even originated. Names for future storms are already given and they are released as a new storm takes shape.

This sapphire Phailin is of course fully ominous for the people living in the path of the sea monster. Precious metals and stones are always associated with good luck or bad omens. Phailin is no different. Phailin prediction is changing by the minute. But there is no uncertainty about its likely time of landfall and the places it will visit. The landfall time is predicted around 5.30 PM on 12th Oct 2013. The place is Gopalpur and its vicinity stretching upto Paradip port near Cuttack. Odisha's capital Bhubaneswar is also in the path of nature's fury. 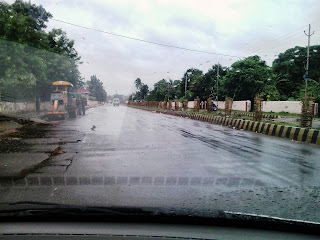 People of Bhubaneswar and other parts of coastal Odisha are reminded by the miseries they experienced when the 'Super Cyclone' unleashed its fury in the state in October 1999 killing more than 10000 people. So people are more careful this time and panicky to some extent. In Bhubaneswar most of the food items are cleaned off the shelves by the people two days before the arrival time of Phailin. Potato was selling at Rs30 on 10th Oct evening against the normal price of Rs10. Even then many people had to go back empty handed.